Bow Ties 101: An Introduction to Bow Ties Everything you need to know to knot up

The right bow tie can add kilometers of debonair to your shirt, suit, and style. It’s almost worth sporting one for the sheer challenge of pulling it off. There are situations, formal situations, high-influence, celebratory situations, for which a tie is just too straight-laced and uninspiring. Here is where the bow tie enters. But beware that one misstep in styling this neckwear can take you from prolifically sexy to laughably cute. We’re here to provide the bow tie style guide.

First, let’s review the options for this particular strain of men’s ties.

“Self-tie” bow ties, or “freestyle” bow ties, are bow ties you tie yourself. This is the proper and standard bow tie, and herein lies 90% of the charm. Once tied, the bow’s natural lines, shape, and slight asymmetry bring stylistic elements that can’t be matched by a pre-tied bow, or a necktie.

Learning to tie a bowtie properly isn’t rocket science, but it does take some patience and practice.  We outline the different methods and tying styles later in this piece.

The pre-tied bow tie is a neat, preternaturally symmetrical bow attached to an adjustable band. It is easy to size and painless to put-on. Pre-tied bow ties look pre-tied and lack the character of a self-tie.

The pre-tied bow tie is suitable for children, and for those who lack or no longer have the dexterity to tie and adjust bow ties for themselves.

We don’t recommend the pre-tied bow tie, even as a “starter” bow tie.

A style-conscious and nuanced man can immediately detect that the look of his pre-tied bow tie is somehow off.

This is a pre-tied bow attached to a metal clasp which hooks or clips directly onto the collar of a shirt. Clip-on bow ties are suitable for young children only. Period.

When Should You Wear a Bow Tie?

A bow tie is rarely the wrong tie to wear. You can pull it off in formal, semi-formal, and even casual settings. But remember that this sartorial exploit is not easily accomplished.

Apart from weddings, the most common settings to see a bow tie in all its glory are black tie events, for which few of us receive regular invites. The black-tie dress code is straightforward: dinner jacket (tuxedo) and a black bow tie (preferably silk). Wearing a self-tie bow tie is imperative: a pre-tied bow tie looks cheap, diminishing both you and your ensemble.

A white tie event, known sometimes as “full dress,” is yet another notch up in formality–it’s perhaps the ne plus ultra, or highest point capable, of formal dress. As the name suggests, a white bow tie (always a self-tie) is necessary. Here’s not the time to experiment with colors.
See our complete guide to formal dress codes .

Though the very phrase “semi-formal” can be vexing, any affair so-billed is a wonderful occasion for experimentation with bow ties. We don’t recommend taking too many risks here either, though. It’s better to lean towards formal than list towards “semi.” By all means, enjoy your range in options when it comes to bow tie styles, materials, and textures, but aim to remain aligned with the dress code. Don’t get too creative just yet.

“Casual” dress codes (and the absence of a dress code) frees you to rewrite the rules. First-time bow tie wearers may lean toward supporting accessories like braces (suspenders), printed socks, and bright shoelaces . We recommend not getting carried away or going in period-costume — unless that’s your thing.

Read our guide on dressy casual

How to Tie a Bow Tie

Tying a handsome bow can be difficult the first few times, but we’ve made the process a little easier with this step-by-step infographic and a video .

The Most Popular Bow Tie Shapes 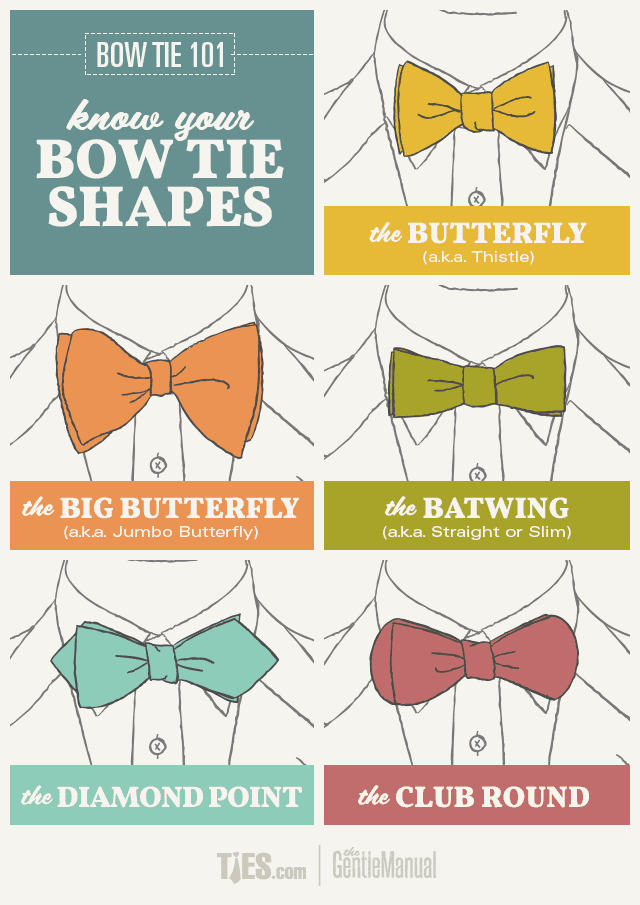 The modern butterfly, also known as the thistle shape, is the most popular bow tie style. This standard butterfly is appropriate for any occasion and it’s great for beginners.

The big butterfly is larger and has a more relaxed, plush silhouette than the standard butterfly. It is sometimes worn in formalwear and is perhaps best-suited to fancy-dress occasions. This large bow tie is also very appropriate for bigger or taller men. Without a suitable context, or on a smaller man, the big butterfly bow tie style can look comic. It is a grandiose tie, and should, therefore, be worn grandly.

The batwing shape, also known as a straight or slim bow tie, is the smallest. Untied, this bow tie is simply a long rectangular strip with flat ends. Batwing bow ties are typically less than two inches in width, and they can provide a clean, symmetrical look. Some regard the batwing as less formal than the butterfly, but it is a classic shape and remains acceptable for black tie events. Be sure not to tie the ears too long, or it will look like you’re wearing a propeller.

The diamond tip bow tie has pointed ends, and when tied, it is delightfully asymmetrical. It’s one of our favorite bow tie shapes.

These days the rounded club bow is the rarest of bow ties. Arguably the least formal of the lot, this is the tie for Sunday drives in classic cars like the Mitsuoka Himiko, a picnic by the lake, or some fly fishing. We like this bow tie style and like it best in cotton and rougher textiles.

How about an untied bow tie around one’s neck? Is it dashing and urbane, or is it just silly? We say: if you’ve loosened the knot at day’s end–or if the bow has been tugged-free by someone planning to unwrap you like a present–then the untied and free-hanging bow tie it is an outstanding look.

The bow tie is mostly a one-size-fits-all affair. With a little trial and error, any adjustable bow tie can be made to fit the neck of the average adult male, so you don’t have to sweat too much about finding your bow tie size.

The band or neck strap of a bow tie has either an adjustable slider or a hook-and-holes arrangement with pre-marked measurements. Bow ties can generally accommodate collar sizes between 14.5 inches to 17.5 inches.

The bow tie has Croatian roots reaching as far back (at least) as the 17th century. Croatian mercenaries used a type of neckwear, which looked similar to a short scarf, to hold together the collars of their shirts. This article was known as a Hvrat, which is Croatian for “Croatian” (or, Croat). Cravate is the French word for “Croat,” and the name of the neckwear eventually became “cravat.” The French upper class adopted the short scarves of Cravates, and in due course, these evolved into bow ties an neckties.

By the 1900s, the bow tie was a staple item in the Everyman’s wardrobe. In the decades after World War II, the bow tie became less common, but even when popularity ebbed, bow ties remained (and still remain) a fixture of formal attire.

Although it never vanished completely from menswear, the bow tie has once again begun to reassert itself as a staple. We are happy to say that an ever-growing number of style-conscious men are now comfortable incorporating bow ties into their day-to-day outfits, and no longer view the bow tie as the preserve of the quirky, the comic, or the contrived. This is a point that we believe deserves emphasis. A man should feel as comfortable switching between neckties and bow ties as he would between monk-straps and lace-ups or between belts and braces.

Read Next – How to Wear Cologne: An Introductory Guide

What are your bow ties made out of?
Most bow ties, especially the high-end ones, are made from silk. However, bow ties can be made from any fabric, such as polyster or cotton. 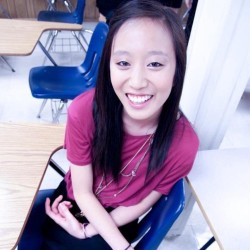 Jennifer Song
Jennifer is a Marketing Intern and Blogger at Wild Attire, Inc. She is a lover of cats, peanut butter, and everything pink.

Jennifer is a Marketing Intern and Blogger at Wild Attire, Inc. She is a lover of cats, peanut butter, and everything pink.
Previous Article 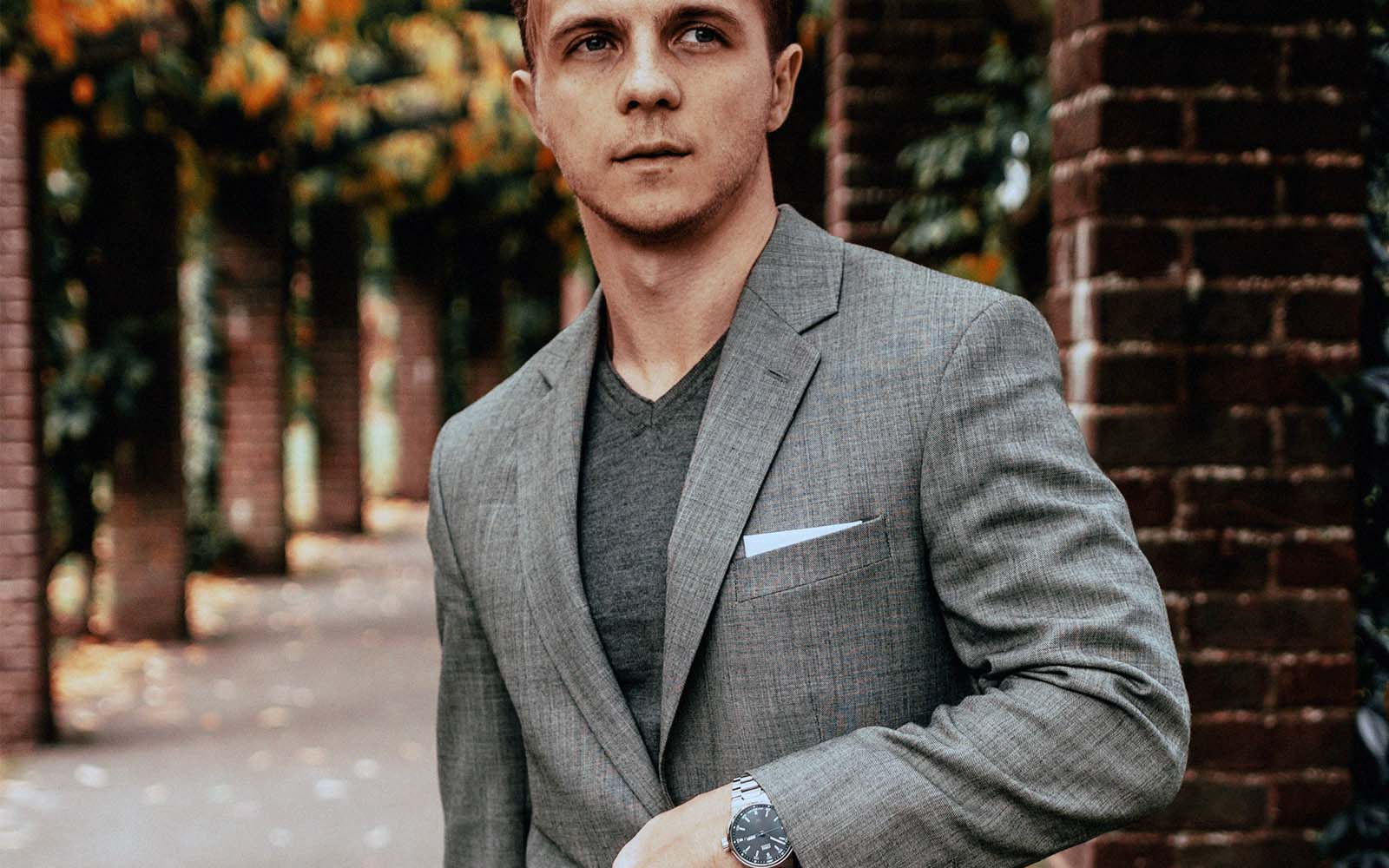 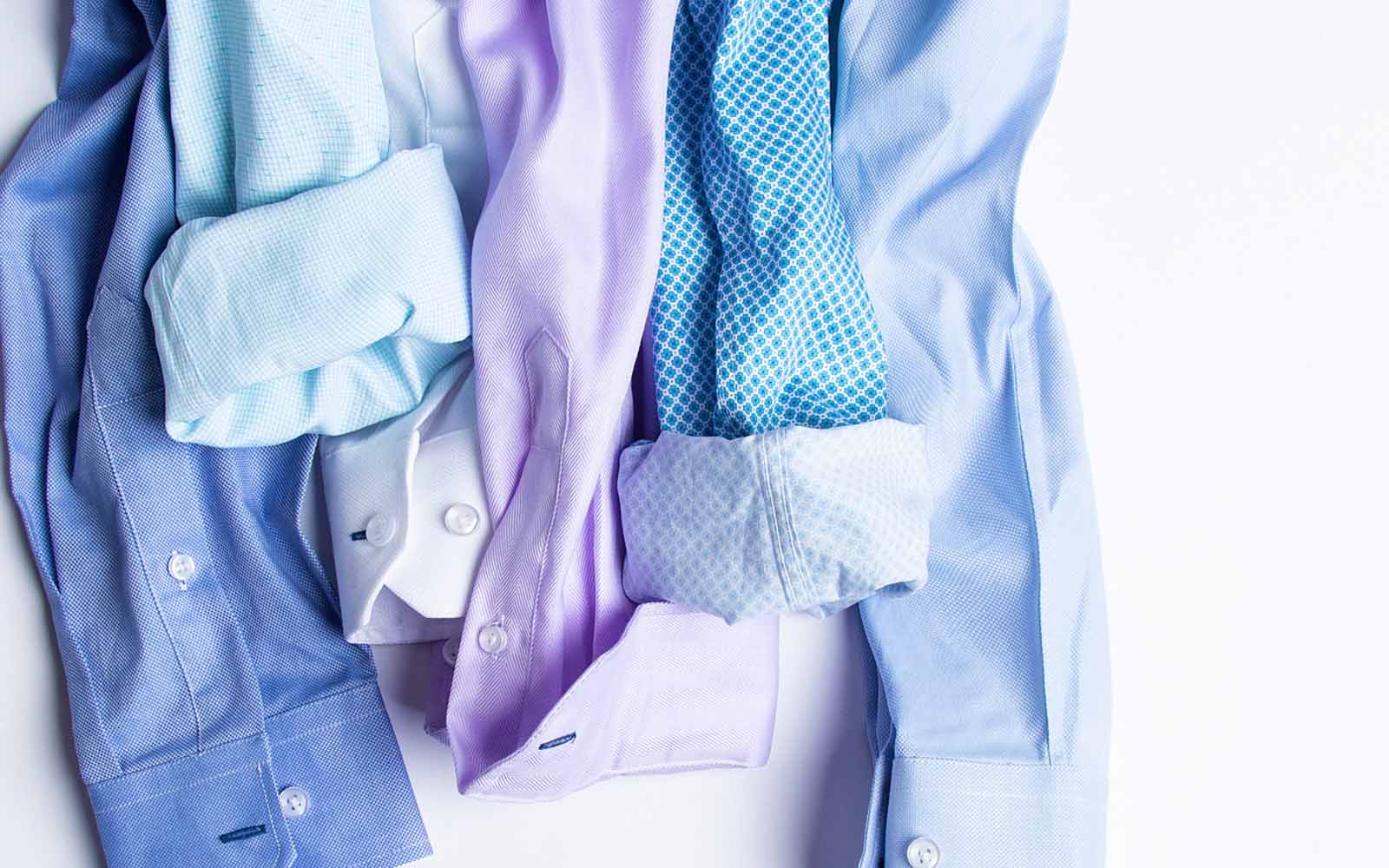 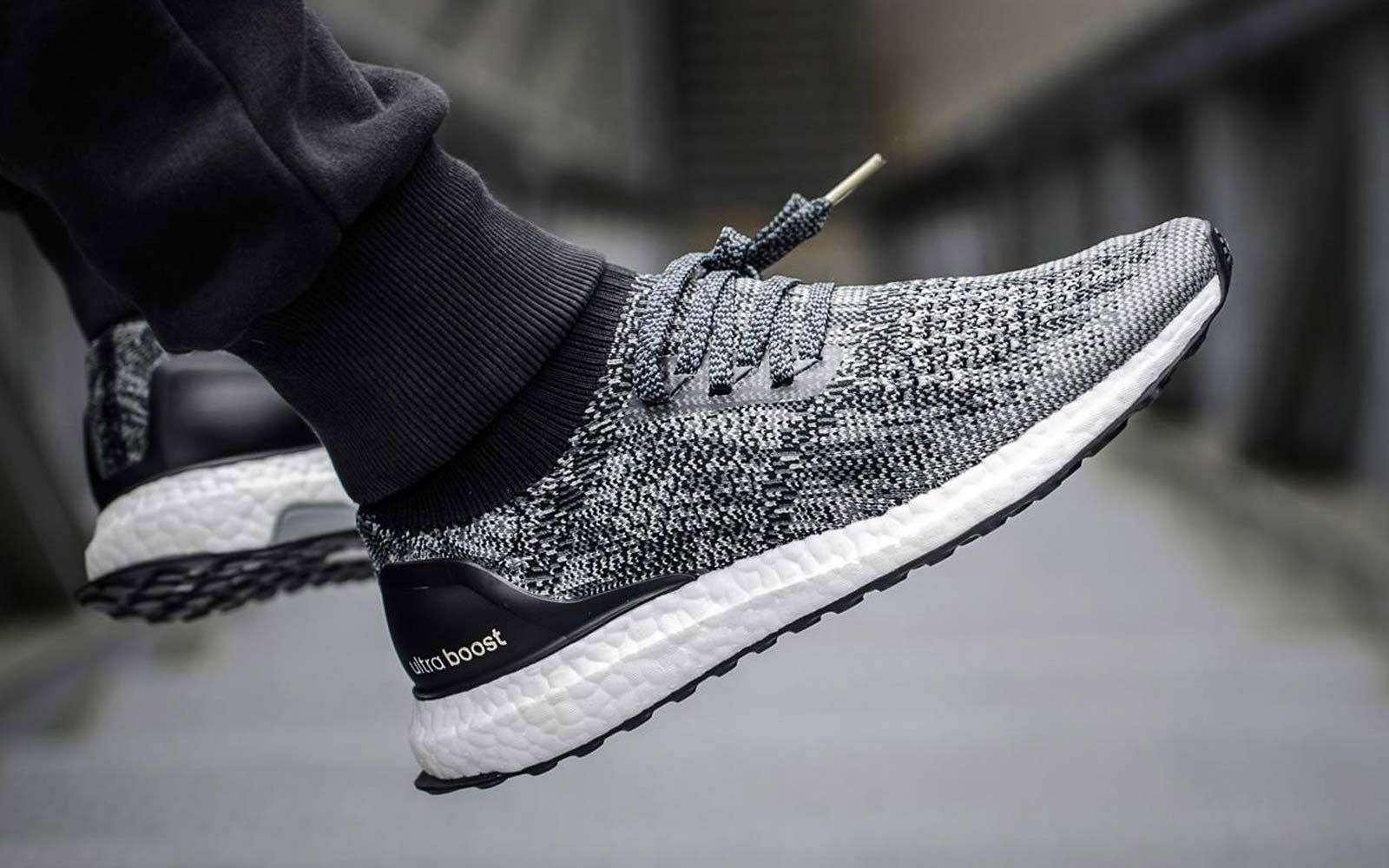 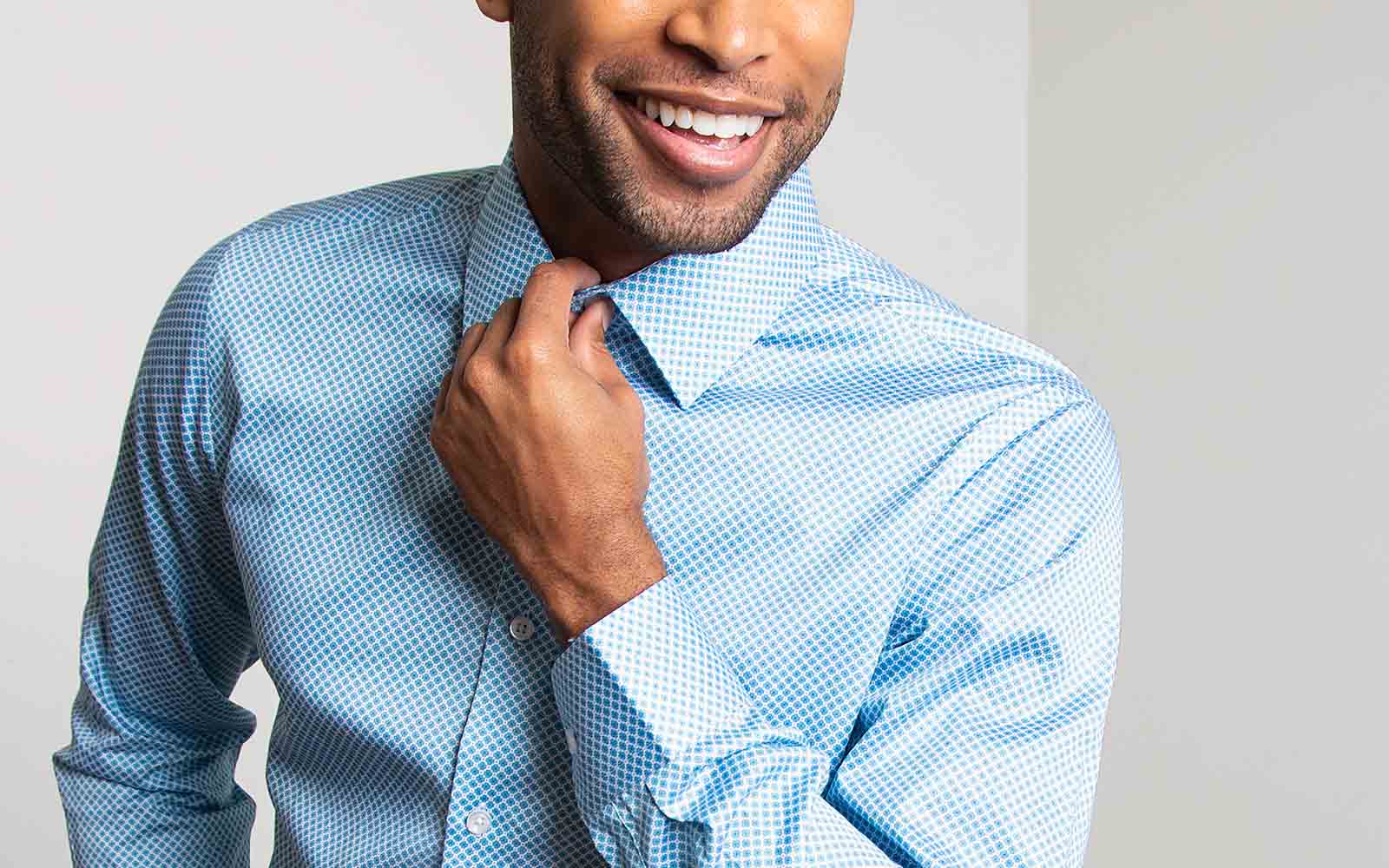 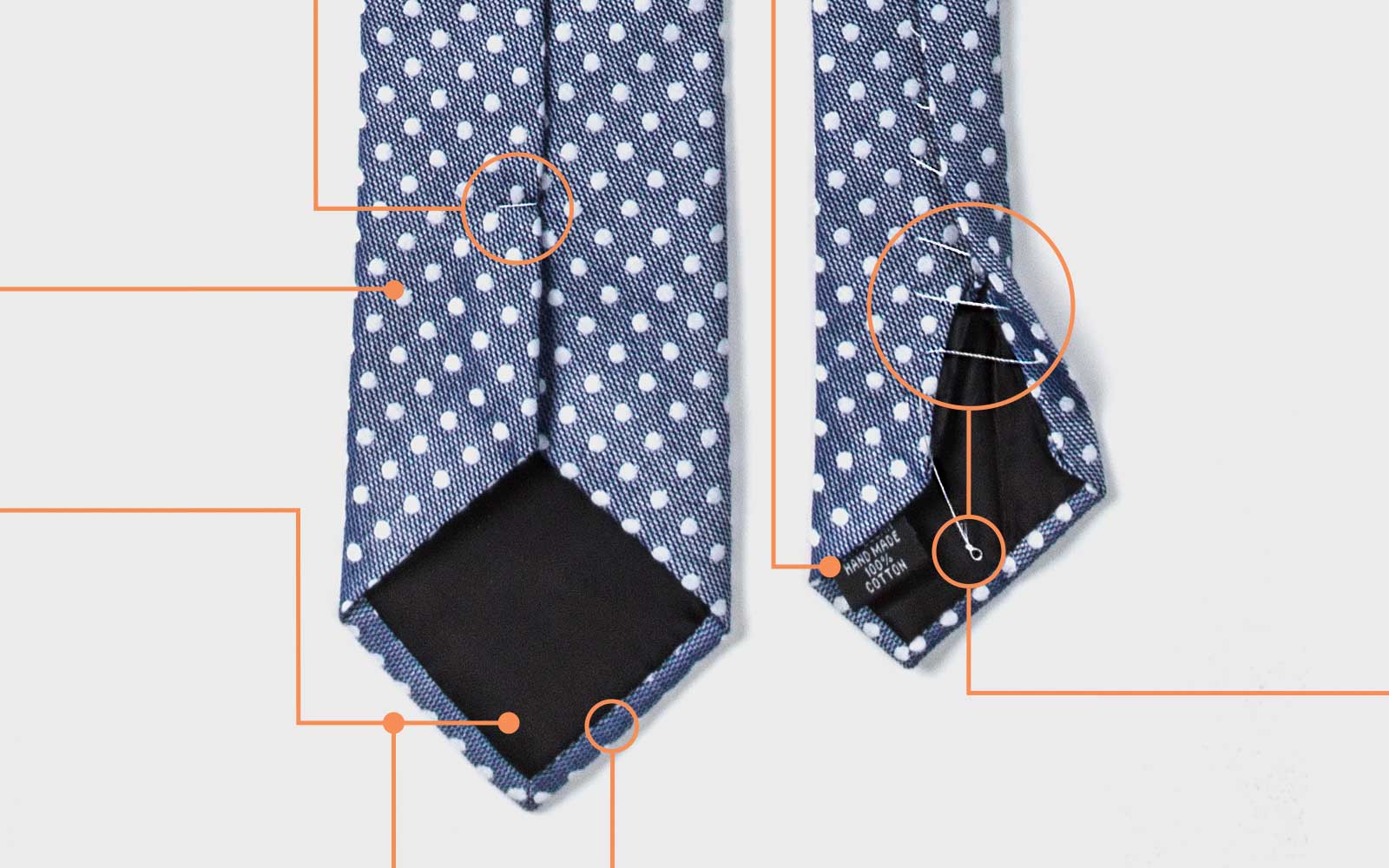 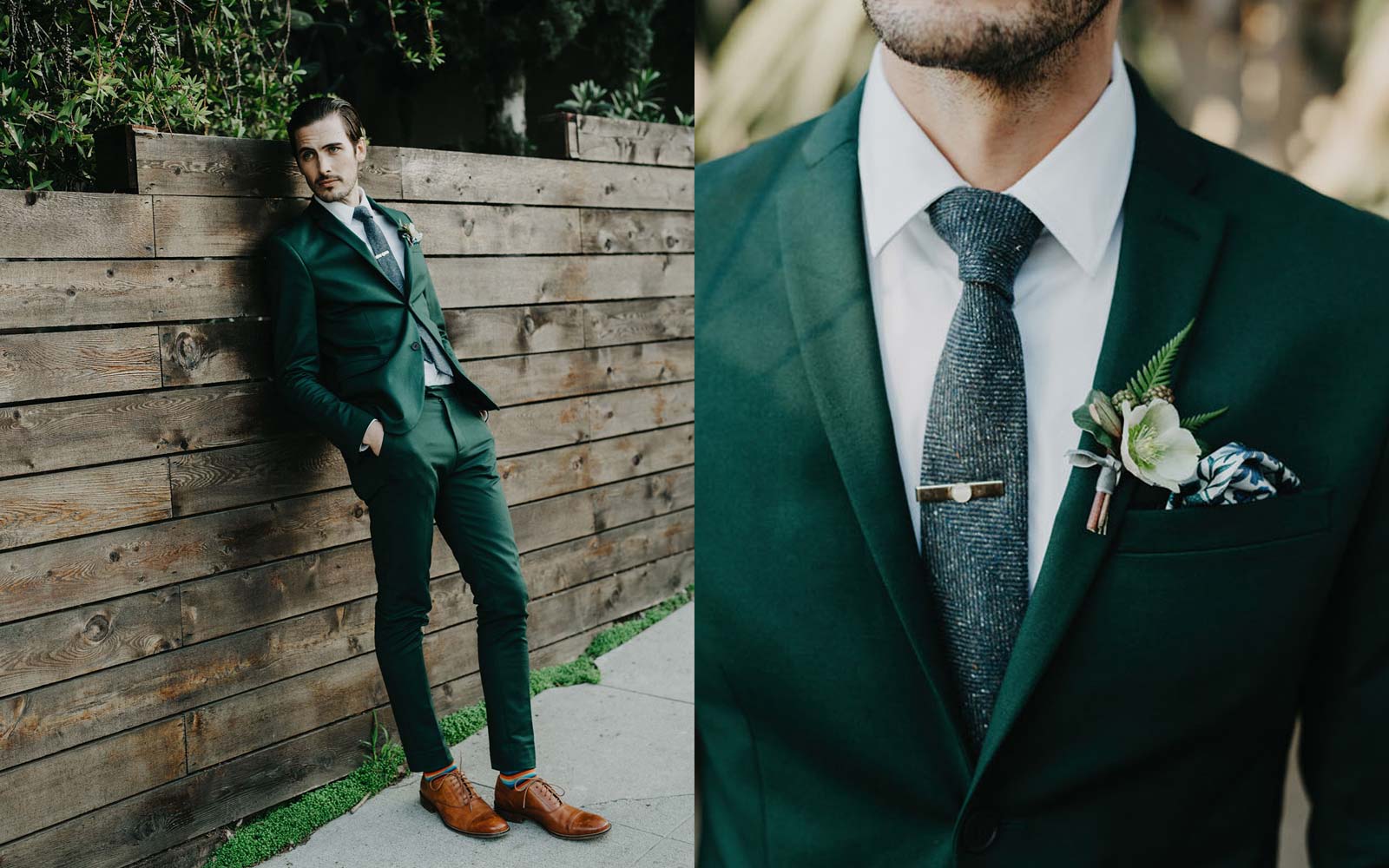 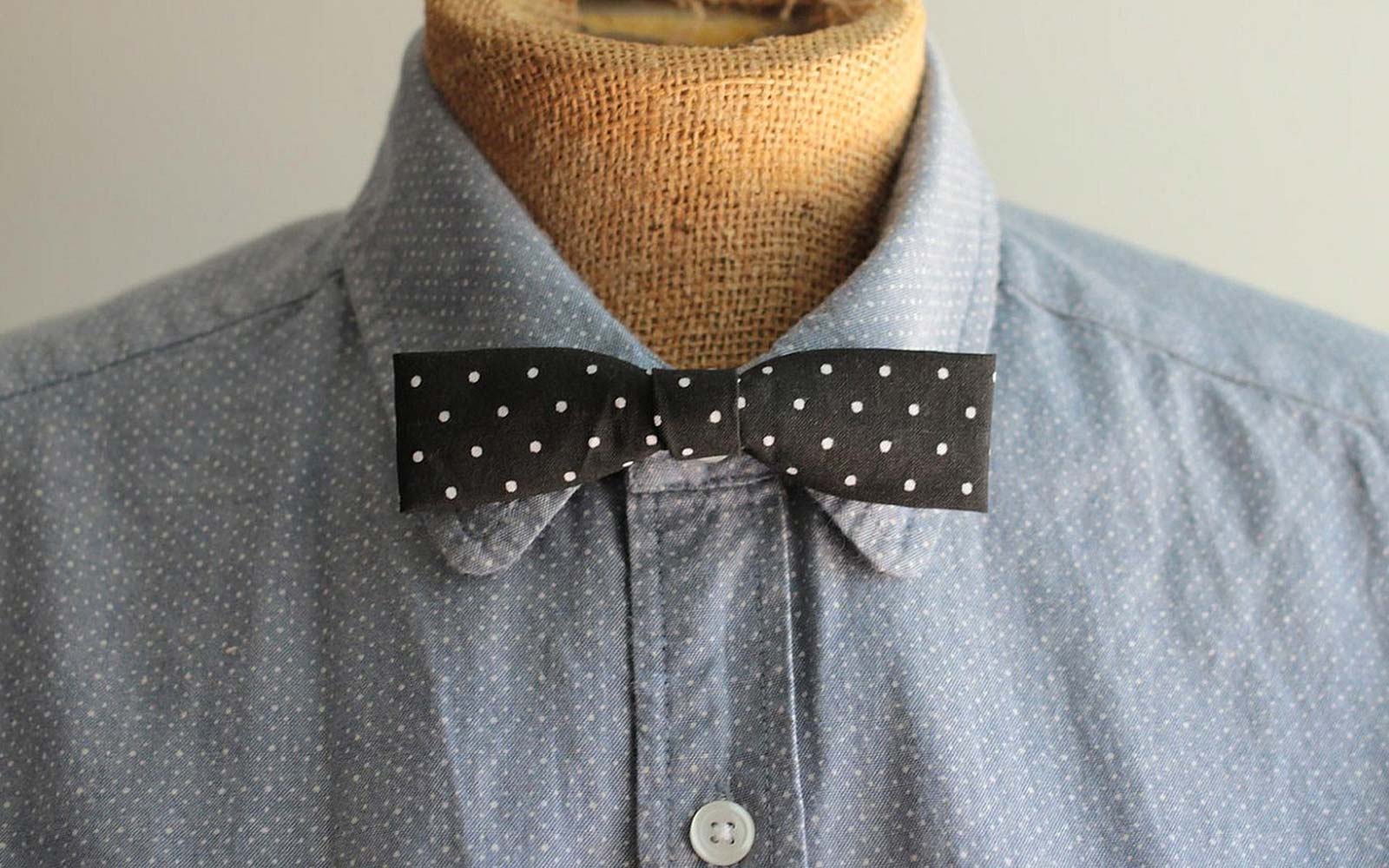 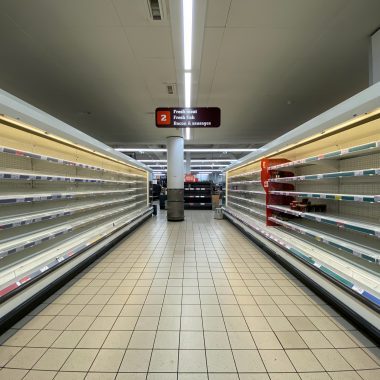